Concerning “Beating Yishma’el at His Own Game” 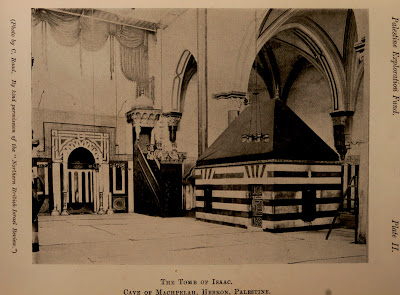 NOTE: The picture above is yet another example of using the name Palestine to refer to something JEWISH.

I listened to what seems to be the Rav’s Teshuva Drosha for 5776, "How to Beat Yishma’el at His Own Game," several times over the last few days. It is one of the most powerful I have ever heard, and not only because the voice of the Rav projects well.

I understand how hard it is to speak with Jews in chutz la’aretz about making major changes in their lives and attitudes – I’ve been there, and been one of those people. But I’m here in Israel now, in Yerushalayim – not in Ir haAtika; nevertheless, in Ir haKodesh.

The Rav spoke movingly, lovingly and with great concern for me and my brothers and sisters here in the Land of the Jews. Clearly he has been here and seen what goes on here.

Since he wants to convince people to take Yitzhak Avinu as their role model for mesirath nefesh as well as prayer, I hope I can help, even a little, by suggesting that he include the following well-known merits of our middle Forefather:


Kol hakavod to the Rav for what he did say (perhaps he felt he got his words in edgewise)! I wish him success in getting his hearers to dress up for davening, pray with more concentration, and give more of themselves. Surely he could go one step further and inspire them to come and live in the land of Yitzhak Avinu, and help us rise up and defend her. Yes, it is very different from what it was then. But we in Israel need Jews with serious mesirath nefesh now. Here is the story of a young, obviously-religious Jew who had to run through a gauntlet of Arabs after having been to Har haBayit. They have a still picture of him fallen to the ground and the women gloating over him as if he were dead. But if you watch the video, he was on the ground only a split second. He escaped to safety, thank G-d – but he got a grilling by security.

Would decent Jews stand for that? I think not. In fact, here is the response of 150 fellow yeshiva bachurim to this near-lynching. Does this qualify as a good start on self-sacrifice?

I don’t need to argue with a Rav who has his values on straight, who speaks straight from the heart and is respected by those who hear him. But I think I need to pick him up a little and tell him that he needs to finish the job.

Make aliyah. Because it's hard. Because Yitzhak Avinu would have, if he'd had to.

May the Rav’s nephew, Shmuel Aryeh ben Malka Feige, have a refuah shleimah.

May all my readers be inscribed for good (and not for bad) in the Book of Life.


Many thanks to R’ Yeranen Yaakov for posting a link to the shiur on his blog. Click on the file that results when you click this link, to download it or listen to it.

IMPORTANT UPDATE: 4000 Karlin Hassidim prayed Selichoth by Yitzhak Avinu last night in the video below. I found out from a trusted friend that police had to clear the way for them. Many thousands more Jews will visit Hevron in the coming days before Yom Kippur. A7


VERY IMPORTANT UPDATE: We will NOT beat Yishma'el at his own game if he continues to OCCUPY THE TEMPLE MOUNT. Obvious, right?

For more steps: Defending the Jewish Temple Mount is a Major Red Line!

For more thoughts on "Beating Yishma'el at His Own Game...

This is an excellent subject matter. We need to explore in greater depth, if possible, the aura of Yitzchak Avinu, how it plays into the Geula and our securing our rights to our "Promised Land", Eretz Yisrael.

Neshama...How do we start. Yitzhak is represented by the sefirah of gevurah - the essence of judgment, limitation, awe and fire. "It is the restraining might of gevurah which allows one to overcome his enemies, be they from without or from within (his evil inclination)."

This relates to R' Frand's goal of beating Yishma'el at his own game, for certain.

I'm looking forward to THE GREAT REDEMPTION. Please help me do my part to bring us there!

Many thanks in advance!

Pray Tehillim for Mashiah to win the war.

1 Tammuz 5781 (Rosh H odesh B) Sefer Tehillim, The Rashi Edition. Here are a lot of versions of Tehillim covers. A call has gone out from a...

Prayer for Prisoners of Zion and the Sick...

Rav Eliezer Berland is FREE as of today, 15 December 2021. As in, at home, not in "house arrest" somewhere unknown, with strangers guarding him (or others from him). He was vindicated in court recently on all charges, and the people who conspired to pin all sorts of nasty things on him are now found to have done them all.
***
Esther Yocheved Pollard passed away on 31 January 2022.
I wrote about her HERE.
***
Want to know who should be tried for her crimes and put in jail? Ahlam Tamimi, who masterminded the Sbarro bombing in downtown Yerushalayim in August 2001. Sign this petition now!
***
Today is the day! 7 March 2022 for the appeal of Amiram Ben-Uliel (Amiram ben Nurit) in the Duma firebombing trial. Continue to pray!

More about what's really happening with Amiram: PDF files in Hebrew and Write to Amiram (Hebrew only)
***
Out of Prison - Yet Not Free
Evyatar Yisrael Eliyahu ben Gila Chana Slonim
Meir David Chai ben Tovah Ettinger
***
Who Knows More about the Status Of...

Note: If donating from outside of Israel, open the "To Donate..." box and fill out the fields, skipping the ID# field, and press Click to Donate. Thank You!
***
Baruch haShem for the freedom of Sholom Rubashkin, Alan Gross from Cuba and Binyamin Nachum Ya'ir ben Leah Devorah Richter from Israel and Na'ama bat Yaffa Yissachar!
***

HDG, Yerushalayim, E"Y Shlemah
Yerushalayim, Israel
Welcome to my blog. I am an ordinary Israeli Jewess who made aliyah some years ago. I am typical here in Israel yet ahead of my time in that I am half Ashkenaziah and half Mizrahiah. This edition of my banner is a picture I took within my neighborhood; the flowers are yellow jasmine. My symbol, the grape, is one of the fruits that Hava haRishona might have eaten when she ate from "the tree of knowledge of good and evil." In 2019 I decided to give my initials a makeover, but not my name. I am still חוה.

Get Israel Out of the Defendant's Chair!

Sanity in a Crazy World